find us on instagram
You are here: Home | Family | Carsyn’s Birth Story

We arrived at the hospital at 7am to be induced. After 3 unsuccessful tries to get my IV they finally got it in on the 4th try. I once again was already having contractions. This time though I was actually 1cm dilated and 40% effaced. The doctor arrived around 10am and then they started the pitocin. At 12pm I was 2cm and the contractions started getting stronger and more consistent. She broke my water at 4:30pm. After this my contractions became very, very strong. She checked me again around 8pm (I think) and I was almost 5cm. After this everything is kind of a blur. The contractions were very close and strong. They didn’t turn up the pitocin anymore. I was not getting any rest in between contractions. 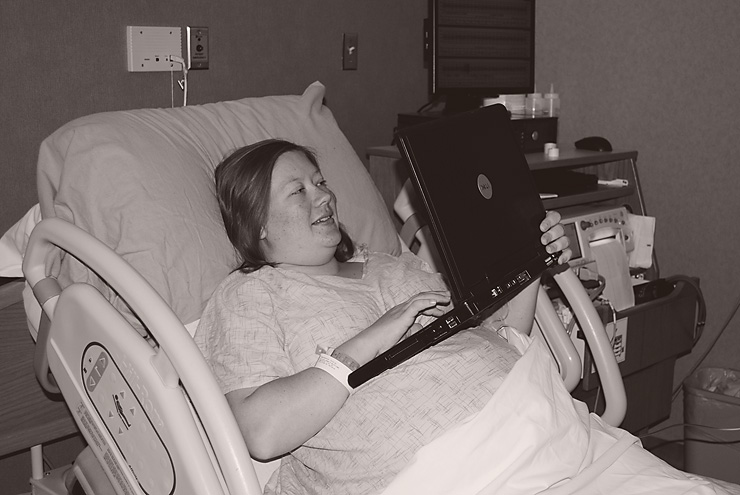 My doctor suggested some Nubain so that I could get a little rest and take the edge off. She was thinking if I could relax a little that it would help me progress quicker. So I went ahead and got a dose of Nubain. I ended up taking little naps between contractions. I don’t remember too much. I did try the exercise ball, walking/standing and the hands and knees position. NOTHING helped to ease the pain of the contractions in my back. I had to lay down. I thought I would want to be up, but I had to be in the bed. It was weird. I just knew that I was in transition labor. 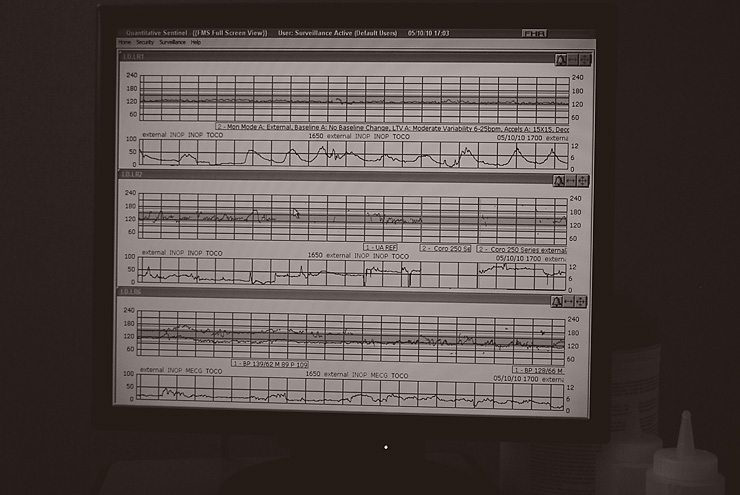 Around 11:15 I really had to pee. I got up and went to the bathroom and ended up having like 4 contractions while in there. I was still kind of drowsy from the Nubain and Kenny helped me back to the bed. I asked the nurse to get the doctor because I was in a lot of pain and having a lot of pressure. The doctor came in about 11:30 and said that I was 10cm! I was so surprised but happy. In about 3 hours time I went from 5cm to 10cm. She said she could feel his head. I was in a really small room, so when she said it was time to start pushing they moved me to a bigger room around 12am. I did a couple test pushes but still felt like I wasn’t ready yet. I took a rest for about 5 contractions, then had a real urge to push. 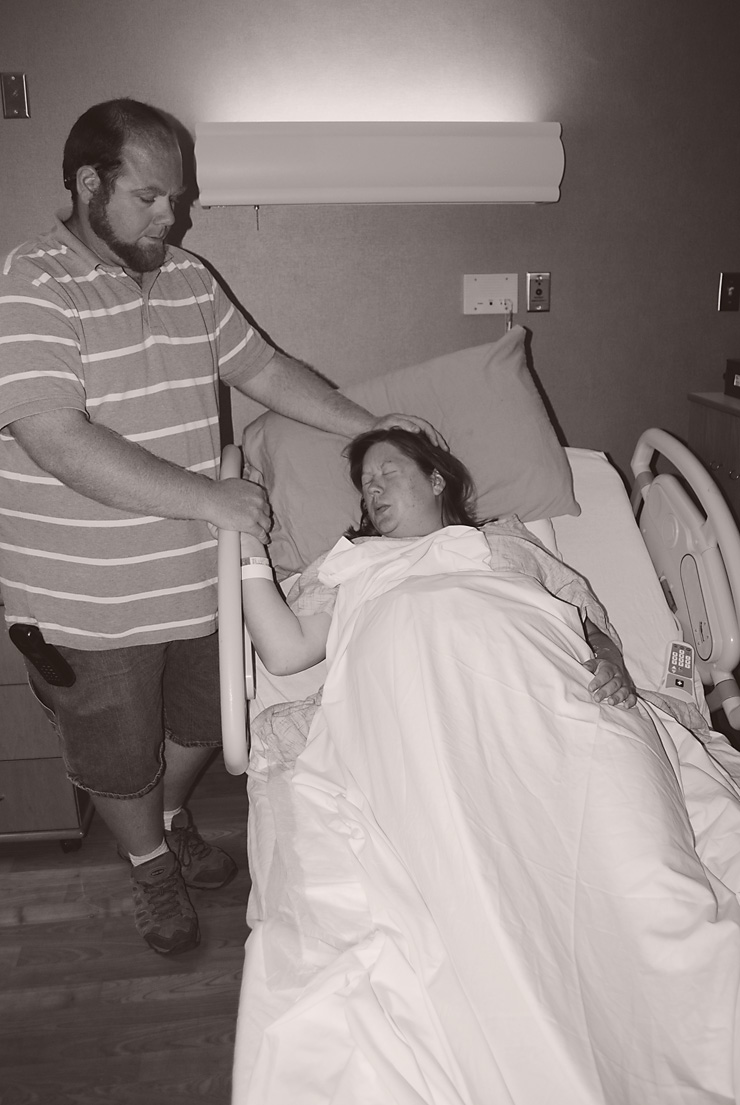 Around 12:15 I started pushing. My doctor was so great at this point, she was talking me through the contractions and the pushing. Telling me exactly what I was feeling and experiencing. I am so thankful for her. At this point I know the Nubain had worn off. After about 30 minutes and what only seemed like 4 or 5 contractions (not positive) he was born at 12:47am. Almost 15 hours of labor from the time they started the pitocin till the time I delivered. His head and whole body was out in 1 contraction and 2 pushes. It was amazing! I can not even describe it, but it was a relief to push. I didn’t even feel the contractions. I am so thankful I did it without the epidural. I was able to control my pushes. The doctor was really amazed at what a great pusher I was. She knew I was determined to have my VBAC and she did everything in her power to make sure that happened. 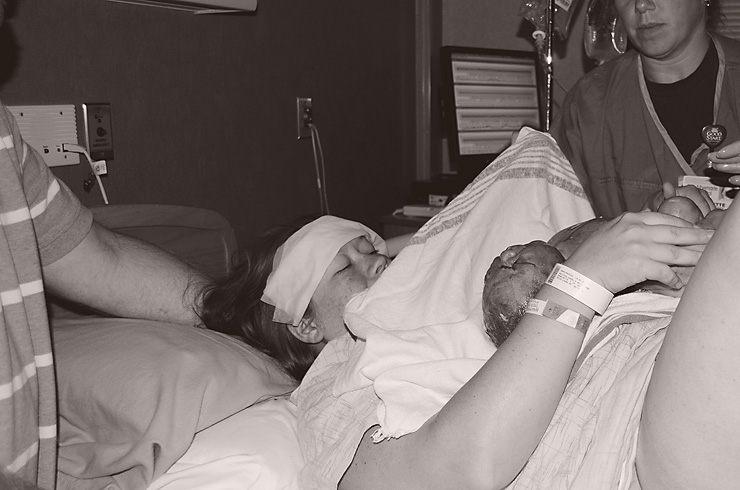 This was the most awesome feeling in the world. Being able to hold him and not being tied down. 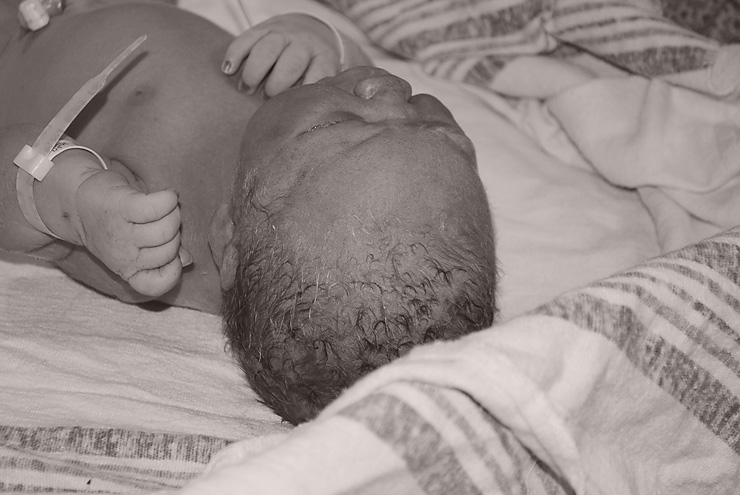 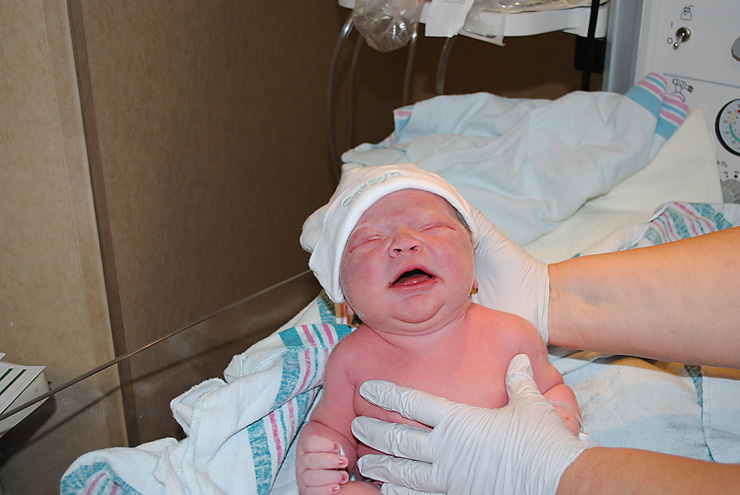 I am so thankful I went to her because I don’t think I could have had a successful VBAC without her. I have to also thank my amazing husband. He was very supportive of me and was so amazing during the birth. My mom and sister were also there and I want to thank them. They stuck by me during the whole birth and were very supportive of my natural birth plans. I am very happy with my VBAC and I would do it all over again. Yes, natural birth is hard work, but it is what your body is made for. Yes, a c-section would have been easier and shorter, but in the long run a natural birth is easier. I got to hold Carsyn as soon as he came out. I was able to eat and get up right after the birth. I was hoping to be able to nurse him right after birth, but he was having some oxygen problems. They had to take him down to the nursery for about an hour and monitor him and give him some oxygen. I was able to use the bathroom and shower instead of having to wait 24 hours before I could even get out of bed. 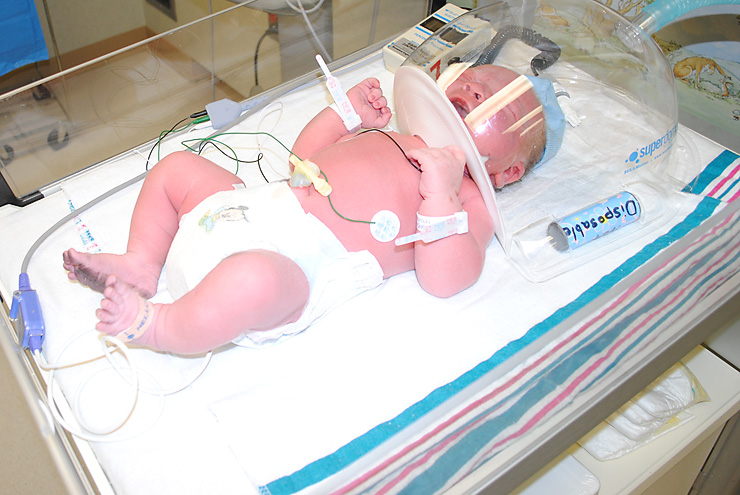 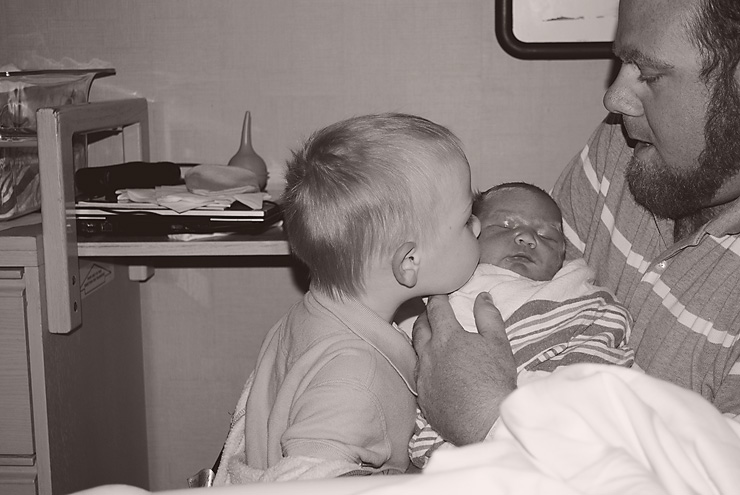 If you had a c-section the 1st time, I would highly recommend trying for a VBAC. It is so worth it. It was a hard and stressful fight to get there, but it all worked out in the end. Thanks for reading my birth story.